Autism: A Mother’s Quest to Spread Empathy and Acceptance

Autism: A Mother’s Quest to Spread Empathy and Acceptance 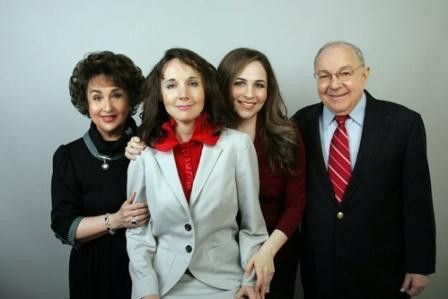 In the earlier post, I introduced you to the fantastic book series, Starabella.

Now, it’s my pleasure to “present” Sharon Fialco, real life mother to the heroine “Starry” who helped to create the series.

Sharon, thank you so much for taking the time to share your family’s story. I believe many of my readers can relate and benefit from learning about your motivation, perspective and background. Thanks again for writing and publishing the Starabella series. It’s a true inspiration.

Question 1. What motivated you to write the Starabella Series?

Answer: As a very young child our daughter Tara was full of enthusiasm, with eyes bright, filled with childhood wonder of the world around her. She exhibited great abilities but also presented puzzling behaviors and challenges. Her greatest challenge was in her ability to communicate socially which made it difficult for her to connect with others.  Not able to get a diagnosis of autism until her early 20’s, we were left with a mystery.

Tara’s passage through the school system became the roughest part of our family’s journey. We came to realize that besides the daily courage and effort it takes to deal with one’s personal challenges, dealing with society can become the bigger problem. Often teased and isolated at school, Tara began to question what set her apart or made her feel “different.” Nothing makes a parent feel more helpless than sending their beloved, idealistic child out into the community or school to have her sense of self worth compromised. Childhood should be a time of wonder and discovery forming the basis for children to have the desire and confidence to reach their fullest, personal potential.

When Tara was seven years old, she received a gift that altered her life. Her grandparents sent their piano from their home in St. Louis to our new home in Honolulu. Tara took to the piano as if it were a part of her. She began to play any music she heard by ear and soon began to compose her own music. Tara used her piano to express many of her thoughts and feelings and reflections of the wondrous world around her through music. Although still speaking in short phrases, Tara was able to write and sing beautiful, poetic lyrics.

Bewildered by the insensitive behavior of her peers, Tara came home to her beloved piano to write songs of a musical, magical world of friendliness and acceptance, more socially sensitive than the one she had to face each day. Her song, “Welcome to a Bright New World” became the inspiration for the Starabella series. In this world “children played and got along and were accepted for exactly who they were.”

Our family joined together to bring Tara’s vision of social sensitivity to other children in their homes, communities and schools. I wrote the stories based on Tara’s experiences and music. Tara composed and performed on keyboard 17 of the 22 songs in the series. My daughter Dana, a talented singer, narrates the stories, perfoming the voices of 12 of the stories’ characters, composed additional music, and sings the songs. My husband Marvin and I published the series.

It is our shared hope to have these books used to teach children at their earliest ages to listen to the good voice inside themselves and recognize what makes themselves and each other special.

Question 2. When Tara was a young girl, she had difficulty communicating. How did she eventually learn to better express herself? Did speech therapy help?

Answer: As I mentioned, Tara could express her thoughts and feelings through expressive music. She created musical pictures with words and sometimes without – when the music “spoke for itself.” Tara, still to this day, speaks mostly in short sentences. Not having an early diagnosis, it was not until her 20’s that she became eligible for speech therapy. Her sentences became longer and more fluid after speech therapy sessions but she regressed when the sessions stopped. She has periods in her life when she speaks in longer fluid sentences but then reverts back. She no longer speaks in a monotone and maintains eye contact when speaking. Therapy sessions were available to her once a week. It would have been beneficial for her to have had access to far more intensive, frequent sessions. That is why young parents today having the availability of your book, “My Toddler Talks” are so fortunate. You provide parents with techniques that they can use with their children at home. I wish we had a book like yours for Tara when she was a young child.

Question 3. Who would benefit from reading your fabulous series?

Answer: All children, their family members, and educators would benefit from reading/listening to the three books of the Starabella series. Starabella speaks directly to the place in all of us that yearns for acceptance and understanding. All children bring personal challenges into the public arena. Starabella’s challenges represent any challenge a child may have. Children identify with Starabella. Forming understanding and empathy for another helps children gain self- acceptance as well. Children learn that when they reach out to befriend or help another, they gain much in return. They become empowered by reinforcing their own communication skills and abilities, they receive gratitude, and they make a new friend. Starabella’s determination to overcome obstacles to reach for her dreams inspires other children to do the same.

The Starabella stories open up the opportunity for parents to discuss the importance of forming attitudes of empathy and fairness with their children. Starabella is a good role model. Parents can point out that even though their child may be dealing with difficulties of their own, they, like Starabella, are worthy of being loved and respected for the wonderful people they are and for the effort they make to do their best each day.

The Starabella stories emphasize to teachers the importance of socially sensitive classrooms where all children feel safe and are encouraged to share what is special inside them. The children in Book Three learn that their classroom is like a big family in which all the members support one another. Starabella’s teacher points out: “When someone in our family isn’t happy, no one is as happy as they can be.”

Question 4. In the third book of the series, “Starabella: Welcome to a Bright New World,” Starry begins kindergarten and experiences instances of being bullied and teased by her classmates. Why is it important for children without autism to learn how to interact with others who may be different from them? How can reading the Starabella books help teach the concepts of empathy, inclusion and anti-bullying?

Answer: Children who listen to and view Books One and Two celebrate Starabella’s accomplishments, feel compassion for her extra challenges, root for her to reach her goals, and gain understanding of her emotions through her music. In this way, they acquire empathy for her by the time she becomes a member of an inclusive kindergarten classroom in Book Three. Starabella’s classroom features a diverse group of children of varying cultures, ethnicities, attitudes, abilities, challenges, and dreams. Children reading and listening will recognize themselves in certain of the characters.

Starabella starts her first day of kindergarten with great enthusiasm only to suffer isolation due to being bullied and excluded from play. She hides under a table and looks out and observes the social dilemmas of her classmates.

When children enter school they begin to make their own behavior choices and form their own rules. It is important that they have the guidance of caring teachers like Starabella’s teacher, Miss Maradise. Miss Maradse presents her students with multiple choices of ways to solve their social problems. Children reading and listening at home or at school are asked to to make choices as well by using a “Magical Mirror” in the book. If they see a smile and that their eyes are shining like stars, they know they made the friendliest choice. They send their thoughts to help the children in Starabella’s class. Children reading and listening share the wonder as Starabella, through her special connection to the stars and the goodness inside her, magically transforms into a kindergarten rock star and leads her classmates and listeners to a “Bright New World.”

Starabella’s special connection to the stars symbolizes what is special inside everyone. The Starabella stories, through beautiful music and art, encourages the magic of friendliness to shine within each child.

When children listen to the stories with a caring adult, the audio CD can be paused at various points for discussion of feelings and ideas prompted by the story. The messages are presented in a gentle entertaining way using expressive, colorful art and beautiful music.

This series aims to make children comfortable with differences at their earliest ages –  before they form negative attitudes that can later lead to destructive behaviors. This prepares them to make decisions that benefit the whole as responsible adults in democratic societies.

Both the bullying and violence in our schools and discord around the globe compel us to share Starabella’s message of HARMONY with children everywhere.

Question 5: What is Tara doing now?

Answer: Tara had a long career performing solo, interactive shows which I wrote incorporating her music. She performed in many preschools, kindergartens, 1st and 2nd grades, and after school programs. She and her sister Dana also performed extensively in community performances. They combined their own music, Broadway, and popular music. Together they wrote and recorded a hit single: “A New Beginning” which topped the charts on inspirational radio stations. Their work has now taken them in different directions. They combine their musical talents only for special projects. Tara is currently the accompanist for a play that her social group is producing. She has the role of Petula Clark, singing and playing her songs. She works doing clerical work for a service agency.

Thank you so much for sharing your inspiring story.